This morning we all woke up to no power in the church or in the trailer due to a storm the night before. Although everyone was a little worried and confused at first we were able to get ready, have breakfast, and make our lunches for the day. We were all able to help each other by lending our flashlights. Since we didn’t have any power we had cereal for breakfast. We made sandwiches for lunch and then we’re on our way to the worksites. (Editor note: the power is back now!) 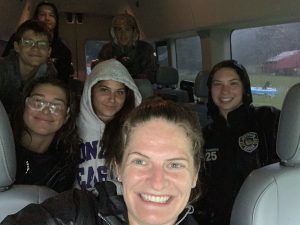 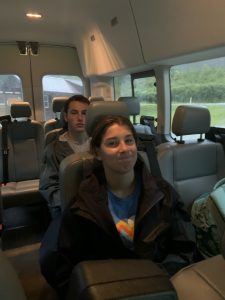 After breakfast our intrepid group set out into the pouring rain to begin our first day of work. The rain tried to stop us, but we were not to be deterred. We had three worksites which we were to work at, our group splitting up to divide and conquer. The first part of the workday was a brutal battle of your very own courageous Potomac Presbyterian Missionaries pitted against the omnipresent and relentless rain. It was a war waged in mud, sweat, and many anguished cries of defiance towards the sky. Ok, maybe the anguished cries towards the heavens were a bit of an embellishment. Anyway, we braved the morning downfall and, after a trench or two were dug, the sky cleared up and we were able to work prolifically and get a lot done. 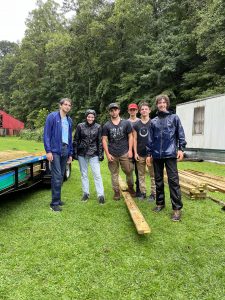 Our fellow mission trip members sat on the stools at the counter as kitchen team one and I cooked a delicious dinner. Tonight we had breaded chicken, Mac and cheese, and salad. I was on salad duty. Here’s John Paul’s thoughts on the salad, “I had the red vinaigrette with the olive oil and it complemented the artisanally cut lettuce.” The salad went perfectly with Leslie’s homemade chicken, cut perfectly by James and John Paul. Let’s see what the next kitchen team can do in the kitchen! 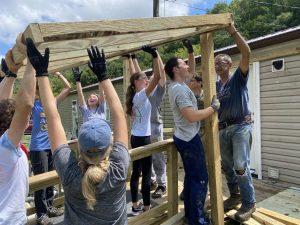 My biggest takeaway today was the aspect of teamwork, as it relates to the summer of connections. Everyone on our site today had special tasks and broke into groups that operated like clockwork, helping each other in the process, but also focused on their specific assignments. That special focus although separate in a way, to me felt like we were connected because we were all working on one specific project in mind, as well as the bigger overall goal of helping the community. I was proud of everyone on my team and the other teams for laying the foundation for the work we’ll do later this week, and we excited to see everyone eager to help each other in anyway possible. When we’re all operating in this mode I believe we are able to do anything we put our mind to; relating to the connections aspect, we couldn’t have done it without one another. 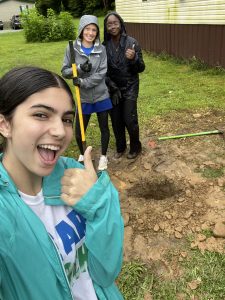 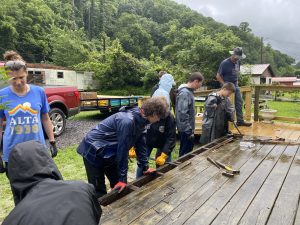 Work was work! We began the first 3 and a half hours of the day in the some pretty brutal rain. Thankfully, with the help of Preston’s music, we were able to power through to build out a fuller foundation for a stronger and much larger front porch for a family of 3.

Some highlights:
1) Bobby is an absolute monster and completely manhandled ginormous 6×6’s
2) Juliette, Harper, and Zara quickly became masterful carpenters and ripped out, cut, and attached new floor boards to the porch.
3) James and Preston know how to dig some holes (even though somehow Preston hasn’t seen the movie Holes).
4) Be sure to look behind you when carrying heavy 6×6’s so you don’t have one leg fall through a 3-foot-hole (please don’t worry it wasn’t a kid it was just me who did this)

It was such a joy watching the kids learn new skills, work together, and remain positive through a lot of challenging and tiring work. To the amazement of our project leader, Marshal, we were able to plant 6 beams, replace 4 rotting floor boards, and begin the framework for the extension on the porch as well. Here is a picture! Looking forward to making some more improvements tomorrow. 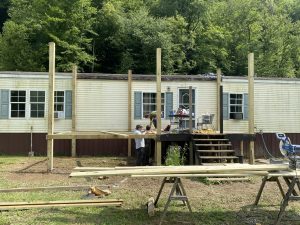 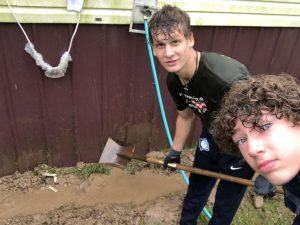 These videos were also taken: